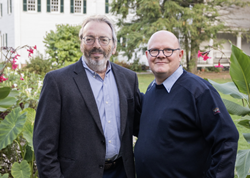 “The attendees learned from world-renowned experts how to distinguish autoimmune mental health disorders from primary psychiatric disorders; symptoms are similar but the cause is different and requires treatment of the underlying infection such as streptococcus or Lyme disease.”

Experts say that the rapid onset of OCD, anxiety, and tics in children and young adults can be caused by an infection such as streptococcus bacteria, however, the underlying cause of the infection is not widely recognized or treated. According to Herb Lachman, MD, a major problem with PANDAS and PANS disorders is the lack of reliable tests that can be used to help clinicians diagnose the condition. In addition, the response to various immune-based therapies is variable. Lachman says, “These problems create suspicion about PANS among clinicians, preventing PANS patients from obtaining appropriate care. One way to address this conundrum is to identify genes that may be involved in predisposing to PANS development.”

DNA sequencing studies conducted by Dr. Lachman, Peter van der Speck and Rosario Triveliti have identified more than a dozen such genes. Studies show that the clinical condition of PANS can be caused by several different pathways including dysregulation of the immune system and changes in the function of glutamatergic neurons, one of the major neurotransmitter systems in the brain. In addition, an overlap between mutations that increase PANS susceptibility with autism spectrum disorders and immune disorders has been found.

“Through additional genetic studies, we hope to identify new treatment models or match immune-modifying drugs to patients depending on their underlying genetic profile,” Lachman says.

The team released their findings at the symposium, titled PANDAS/PANS: Recognizing, Understanding, and Treating Neuropsychiatric and Immune Disorders in Portsmouth, New Hampshire last week. Other new developments were also discussed. “The Alex Manfull Fund is a nonprofit organization committed to providing an opportunity for clinicians to discuss early detection and treatment,” says organizer Susan Manfull, Ph.D., who lost her daughter to PANDAS. The event was packed to capacity and the videotapes will soon be available for viewing at no charge: TheAlexManfullFund.org

“The attendees learned from world-renowned experts how to distinguish immune-mediated mental health disorders from primary psychiatric disorders; symptoms are similar but the cause is different and requires treatment of the underlying infection such as streptococcus or Lyme disease,” Manfull says.

About the Alex Manful Fund

The Alex Manfull Fund was established in 2018 to raise awareness of PANDAS/PANS so that young people can improve treatment outcomes. Alex Manfull was 26 years old when she died of panda effects. Her parents started a non-profit organization to honor their daughter’s legacy: TheAlexManfullFund.org